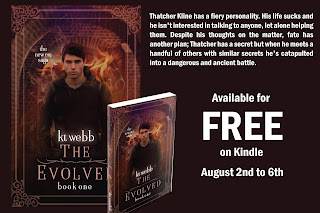 
Thatcher Kline has a fiery personality. His life sucks and he isn't interested in talking to anyone, let alone helping them. Despite his thoughts on the matter, fate has another plan; Thatcher has a secret but when he meets a handful of others with similar secrets he's catapulted into a dangerous and ancient battle.

The Evolved are the final descendants of the Old Immortals. Their super powers not only make them freaks but also make them the only people who can save the world. Together with their remaining ancestors they must discover who they are, the prophecies that guide their lives, and face a terrifying enemy. 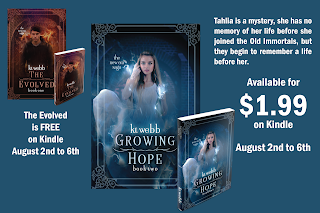 Tahlia is a mystery, she has no memory of her life before she joined the Old Immortals, but they begin to remember a life before her.

The legend is that she was locked away in the golden sphere with the evils of the world. When Pandora released the Maladies on an unsuspecting world, she also released Tahlia, the spirit of hope personified, and altered the course of humanity forever.

Despite their still-healing wounds, the Evolved have embraced their mission. They've spent the last five years cleaning up after their battle with Absalom, but now they are discovering that new enemies are stepping out of the shadows. In order for the Maladies to drown humanity in their darkness they must first snuff out the light. 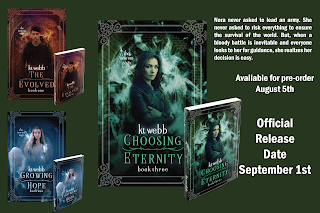 Choosing Eternity Blurb:
Nora never asked to lead an army. She never asked to risk everything to ensure the survival of the world. But, when a bloody battle is inevitable and everyone looks to her for guidance, she realizes her decision is easy.

As they face the return of the strongest evil ever to exist, the Evolved must expose long-held secrets and forge alliances to strengthen their cause. They quickly discover this is an enemy they are not meant to fight and have to overcome the obstacles he puts in their way to keep them from bringing back the only person who can.

The final prophecies are coming to pass, death is all around them, and they face uncertainty at every turn. 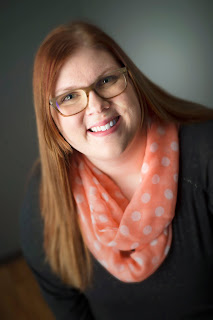 Bio:
KT Webb is a big city girl living in small town South Dakota. Although she was born in Michigan, most of her younger years were spent between the suburbs of Chicago. Moving to South Dakota was a big change, and she never would have guessed she'd fall in love and decide to stay. She has been married to her wonderful husband since 2006 and they have two beautiful children ages 7 and 4.

KT has been writing for as long as she can remember and always dreamed of becoming a published author. She loves to create stories that make readers look at things differently and question reality; which is probably why she tends to write paranormal or fantasy novels.

She is a firm believer in the power of redemption, second chances, and that magic surrounds us every day if we know where to look. KT is a goofy and fun-loving person and is often described as snarky, bold and brash. 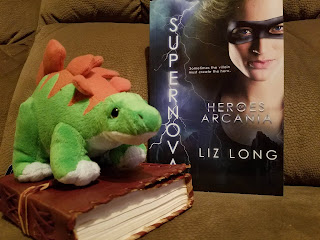 FROM AUTHOR KT WEBB:
I have a giveaway going on this week!

If you sign up for my newsletter between August 2nd and August 6th, you will be entered to win the items pictured AND a $10 Amazon gift card.

Stegosaurus: His name is Steggie and he's very special to Thatcher, one of the main characters in my series.

Leather Bound Journal: Similar to the journals Dorian, one of the Old Immortals, keeps to chronicle his experiences and research.

SuperNova: Liz C. Long is one of my favorite authors. She writes about character with extraordinary abilities, just like the characters in The New Era Saga. This is a signed copy of the first book in the Heroes of Arcania series.

Just head over to my website to sign up for the newsletter and you'll be entered to win this prize package!


www.ktwebbauthor.com
Posted by Reading For Fun at 7:00 AM