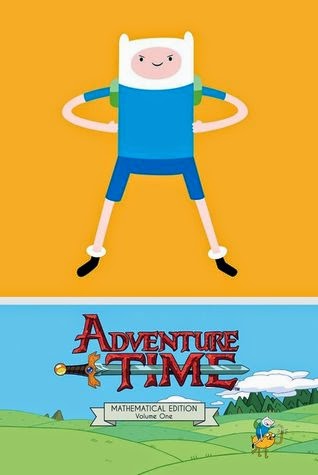 Title: Adventure Time The Mathematical Edition Volume One
Author: Ryan North
Pages: 144
Rating: 4/5 Stars
Summary: It's ADVENTURE TIME! Join Finn the Human, Jake the Dog, and Princess Bubblegum for all-new adventures through The Land of Ooo.The totally algebraic adventures of Finn and Jake have come to the comic book page! The Lich, a super-lame, SUPER-SCARY skeleton dude, has returned to the the Land of Ooo, and he’s bent on total destruction! Luckily, Finn and Jake are on the case...but can they succeed against their most destructive foe yet? Featuring fan-favorite characters Marceline the Vampire Queen, Princess Bubblegum, Lumpy Space Princess and the Ice King!
Review: I had never heard of this show or comics/ graphic novels until Cat from The Little Book Owl mentioned them on her youtube channel. I figured that if she liked it so would I. The perfect opportunity came when I saw these volumes at Comic Con and grabbed them for myself.
I really liked this edition. I love the drawings and the characters are fantastic! I also liked that it was humorous. The notes at the bottom (although the colour was really hard to read) were funny as well.
I will absolutely be reading more of these since I do own a few more haha. Hopefully I enjoy them as much as this one. I would recommend these to those who enjoy shows like Spongebob. 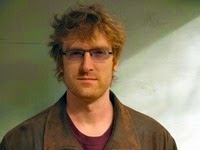 Ryan M. North is a Canadian writer and computer programmer who is the creator and author of Dinosaur Comics, and co-creator of Whispered Apologies and Happy Dog the Happy Dog.

North grew up in Ottawa, Ontario where he studied computer science (minor in film) at Carleton University before moving to Toronto for his Master's degree in Computer Science at the University of Toronto, specializing in computational linguistics. He is a humorist, programmer and longboarding enthusiast; but also designs t-shirts as a day job.

Probably his most well known work, Dinosaur Comics, a fixed-art webcomic, has run for more than 1,500 issues and has been published by Quack!Media as The Best of Dinosaur Comics: 2003-2005 AD: Your Whole Family Is Made Of Meat. His creation of numerous web tools and Dinosaur Comics serve as a full-time source of income for North, making him one of a few self-sufficient webcomic artists. Before Dinosaur Comics, North created Robot Erotica.

North is currently editing and anthology of short stories about "a machine that could tell, from just a sample of your blood, how you were going to die" called Machine of Death.

Ryan North, it should also be noted, is awesome.
Posted by Unknown at 6:29 AM

Email ThisBlogThis!Share to TwitterShare to FacebookShare to Pinterest
Labels: Review